The 88th Regiment of Foot, nicknamed “The Devil’s Own,” was an Irish regiment of the British army. It was one of eight regiments raised and garrisoned in Ireland. The 88th Foot were raised in 1793 to be prepare for the threat from Napoleonic France.

One of their early actions was in the British invasion of Rio de la Plata -an attempt to seize Spanish colonies in an area of what is now Argentina and Uruguay. As early as 1711 British officials had discussed the benefits of having a British colony in Rio de la Plata. In late 1806 the 88th were loaded and held aboard a ship for a month before sailing to join the rest of a convoy at Cape Town. They were then expected to invade Buenos Aeries in a sneak attack after more than six months trapped aboard ship. Needless to say, they were not in the best shape to go immediately into battle. They were then stuck fighting an action in the streets of the city of what we would now call “urban warfare” and were eventually forced surrender.

It was during the Peninsular War that was romanticized by the Sharpe’s Rifles novels and movies that the “Devil’s Own” gained distinction and their nick name. They were described by Wellington himself as “that most astonishing infantry”. They served in Portugal and Spain from 1809 to 1813. A Lieutenant William Gratten served with the 88th and his published diaries provide a first-hand account of their war. He described them as “a parcel of lads that took the world aisy“, and “without shoes they fancied themselves at home and without food they were nearly at home“. When General Pictin received command of them he referred to them as “The Connaught Footpads” due to their reputation for plundering, but he came to value their abilities when it came to hard fighting. He began to use them as shock troops to break the enemy at critical points in battle with direct hand-to-hand fighting. It was for this fierce fighting that Pictin himself gave them the nick name of the “Devil’s Own.”

Their first major distinction in the war was at the Battle of Bussaco in September 1810. The Anglo-Portuguese army under Wellington was in retreat towards Portugal and greatly outnumbered by the French. He decided to fight a delaying action to slow the French advance. He was in a good position for it to work, but a French column marched up approaching a weak spot in the British lines threatening to split Wellington’s forces. But the Scottish colonel of 88th, Alexander Wallace, took the lead and the 88th, supported by four companies of the 45th, charged the French column and forced it back down the side of the mountain. Wellington had witnessed the action and told Wallace “Upon my honour, I have never witnessed a more gallant charge than that just now made by your regiment!“

Eventually Wellington had broken the French offensive into Portugal and was chasing them back towards the Spanish border. Wellington was trying to keep French relief troops from reaching the besieged city of Almeida, Portugal. The center of the British lines were at the village of Fuentes de Onoro, and the control of the village changed hands several times and the French had recently driven out the Scottish Highlanders. Wallace, with the Connaught Rangers, sent word to Wellington that they would take back the village. The entire Devil’s Own followed by the 45th Nottinghamshire and the 74th Highlanders swept in. “As they drew level with the torn and blackened Highlanders, the latter gave them a cheer, but the Rangers passed on in grim silence. Then the whole martial concourse, Irish, Scottish, and English went forward after the 88th in a surge that swept the French away with it.“

in 1812 a Lieutenant William Mackie volunteered to lead a “forlorn hope” as the first storming party to enter a breach in the defenses of Cuidad Rogrigo. He was granted the command of 20 volunteers who would be followed by the entire 3rd division. Leading a forlorn hope as the first wave was often certain death, but if a young officer survived a successful attack it was an almost guaranty for a promotion to captain. General Pictin told them “Rangers of Connaught! It is not my intention to expend any powder this evening. We’ll do this business with the cold iron” As they marched off with unloaded muskets one of the staff asked why, and was told “Because if we do not do the business with the bayonet, we shall not be able to do it at all.” At which Wellington is said to have murmured: “Let him alone, let him go his own way.”

The attackers had to make their way across a 300 yard approach with grapeshot raining down and an 11 foot deep ditch protecting the breach in the defenses. In the course of the attack a powder magazine exploded on the ramparts killing 300 -French and British alike. A single cannon remained in the breach itself, and a single living British officer, a Major Thompson of the 74th Highlanders, remained at the fore. He, and three men of the 88th threw down their muskets and leapt across the ditch to attack the 5-man gun crew with nothing but bayonets. Although one man lost an arm to a sabre cut they won the breach to the cheers of the troops following them.

The 88th went on to serve with distinction in the Crimean War, and were sent to in India after the 1857 rebellion and served there for 13 years and of the 990 shipped out, lost 9 officers and 407 men over the course of their deployment. But their service was not without controversy. While stationed in the Punjab, on June 28 1920, five men from the 1st Battalion, decided to protest against martial law in Ireland by refusing to obey orders. Poor conditions in the Barracks appear to have contributed to the unrest. The protestors were soon joined by other Rangers, and eventually spread to the Connaught Ranger companies stationed at Jutogh and Solan.

Initially the protests were peaceful with the protesting soldiers simply putting on Sinn Féin rosettes and singing Irish nationalist songs. However, on the evening of July 1st about thirty men, carrying bayonets and led by a James Daly, attempted to seize their company’s rifles. The troops guarding the magazine opened fire and two were killed: One was with Daly’s party and a Private Sears who was just was returning to his quarters when struck by a stray bullet. Within days, both garrisons were occupied by other British troops. Daly and his followers surrendered and were taken prisoner. A total of 88 mutineers were court-martialed: seventy-seven were sentenced to imprisonment and ten were acquitted. The 21-year-old Daly was shot by a firing squad and was the last member of the British Armed Forces to be executed for mutiny. In 1923, following Irish Independence, the imprisoned mutineers were released and returned to Ireland.

They also fought in the Zulu War, the Boer War, WWI, the 1916 Easter Rising in Ireland, and were eventually disbanded in 1922. 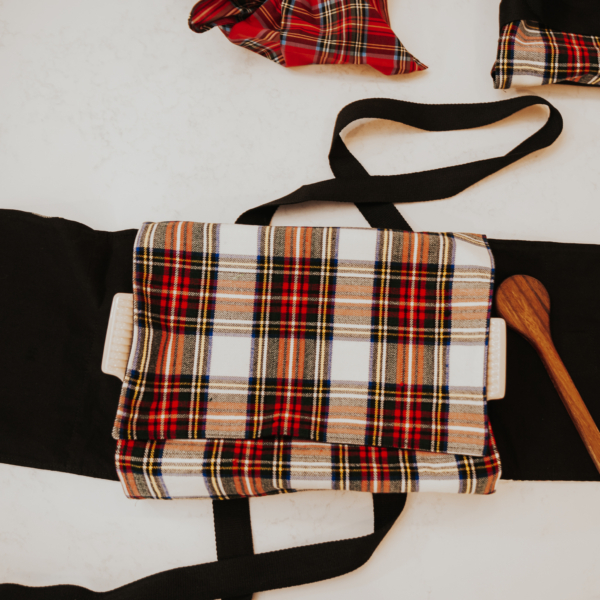 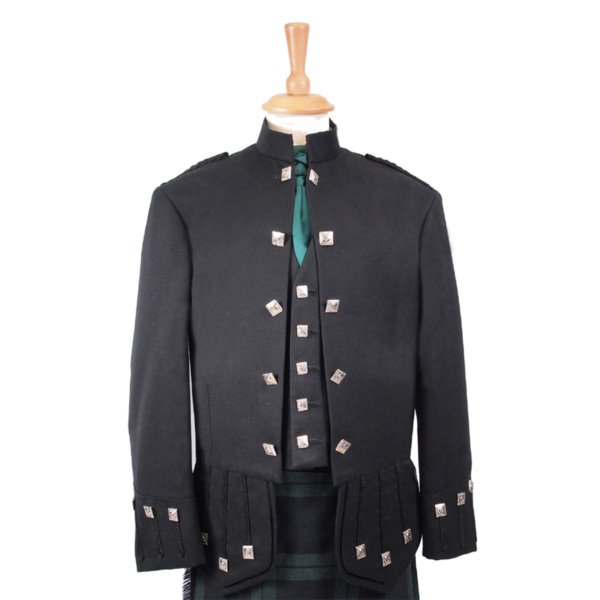 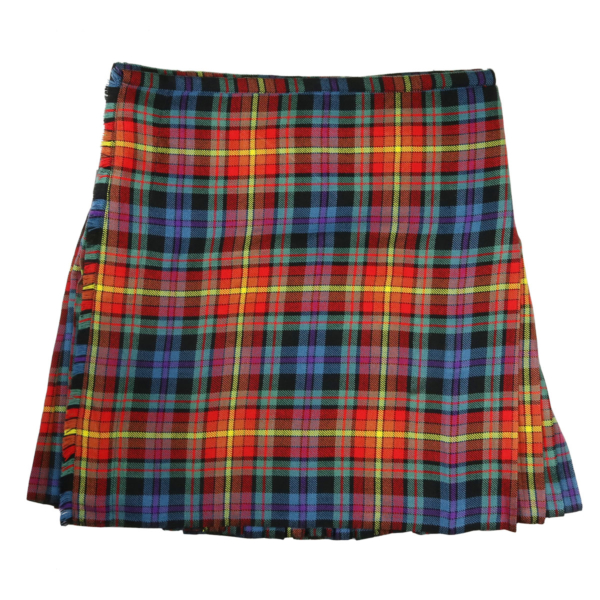 The LGBTQ+ Pride Tartan: A watershed for the modern LGBT movement arose from a series of protests in New York in 1969 and to pay homage to all those involved, this tartan is based on the New York City tartan and incorporates the variety of bright colors used to identify that movement around the world. 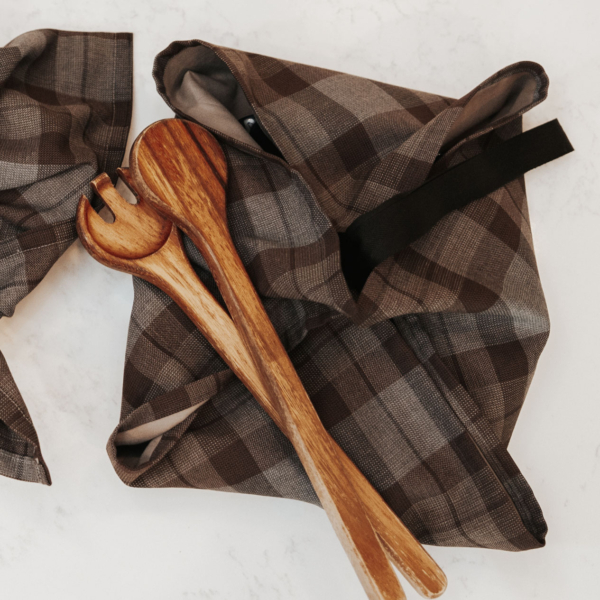